Myself and my wife visited Center Parcs in Longleat Forest at the end of July 2008 for a mid-week break. I thought that I would do a quick write up to help refresh my memory in the future and maybe answer a couple of questions that other people may have.

I could give a blow-by-blow account of everything that happened on the day, but I think that could be a little tiresome so essentially what I am going to do is give a quick overview of the break (Monday - Friday) and then go into a little more detail on the parts of the break that stood out for me. I have included images where appropriate, I took about 60 shots of which 45 were worth keeping, if you are interested in seeing the rest of the shots mail me and I will send you a link to my gallery on Facebook.

We arrived from Brighton into Warminster at about 1100 and then at the arrivals lodge about 1130, we spent some time in the Subtropical Swimming Paradise, got settled in the apartment, picked up our bikes and found some food at the Pancake House. On Tuesday we had booked onto a Geocaching event, which was great in principal but was not as easy as it sounded, did not get a chance to make it swimming, but did manage another visit to the Pancake House. Wednesday saw us down at the lake again this time by the lake playing crazy golf and on the lake in pedalos, some more swimming. Thursday was a gentle day spending some time swimming, cycling around and packing, finished up by an evening nature walk with a park ranger. Friday saw the end of our visit and a quick visit to the Subtropical Swimming Paradise before getting the taxi back to Warminster train station. 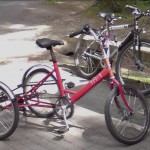 Freewheeler’s is the name that Center Parcs gives to their cycle hire shop, these people should be given a huge amount of credit as they run a very slick operation. We had booked my mountain bike and Catherine’s tricycle in advance on the Internet, so we were able to walk in and out in about 10 minutes.

The cost of the service was more than reasonable and included cycle helmet and lock hire (which I do recommend after coming off my bike several times over the last 20 odd years). If you have booked your break you should be able to book bikes and several other services on-line, unfortunately the trikes are only available to guests with a disability - or I am sure there would be more around the village. 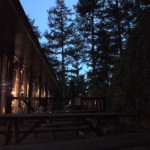 I have fond memories of the Pancake House from my childhood visits to Center Parcs with my parents. It has not changed vastly, there are a few differences in the menu as the organisation has obviously tracked changing parent views with regards to food, making the kids menu virtually all organic food and “healthy”.

The food itself was excellent, a great range of vegetarian options for both mains and desserts. It was so good in fact that we went back again for dinner on Friday.

Tuesday night was a particularly busy night for the Pancake House staff; somewhere along the line something went wrong, as it turns out however they gave us the large rather than the regular version of the pancakes we ordered. The staff were obviously stretched, however they did a really good job and always had a smile on their faces.

Catherine and I had not realised the sheer amount of walking involved in the Geocaching event that Center Parcs put on, it was fun finding the first three but at that point we really had to give up as we had been cycling and riding around for two hours and Catherine was really not up to doing more without risking problems later in the week.

It was well planned and great fun to do what we did do, we will certainly be looking into Geocaching closer to home, and probably ones that we can do at our own pace. 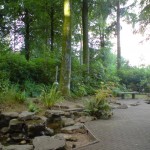 Catherine booked us on this nature walk via the Internet booking system that Center Parcs has introduced. At the beginning the ranger (his name was James) joked that this would be the highlight of our stays, and I honestly must say that it was. James was well equipped with the gear (torches and a bat detector) and the knowledge to show us the bats and owls that came out after dark on the village. I won’t say much more as this is something that you are best finding out by going along on your own.

The one thing that we would have been better armed with was that the walk started by the lodge in the village square and ended up at Jardin Des Sports by the lake, and thus a fair distance from where we left our bikes, however this was swiftly remedied by getting the land train round to the village square (in the pouring rain, we were not going to walk).

There are lots of things I could write about our Center Parcs adventure, however these are the things that really stick out in my mind. All in all Catherine and I had a really relaxing mid-week break away, and I think we would recommend it to anyone even slightly inclined to visit.