So, today went much better than last week. We did quite a nice loop of the area  I am contemplating taking a GPS with me next time and leaving it logging on the back seat so that I actually know where I have actually been. Maybe I will do that when I have passed my test, could be a little distracting if it started beeping at me.

I got two major things from my lesson today; first being that after last week driving isn’t that bad after all, the second is that speed limit signs should be seen on both sides of the road like a gate. 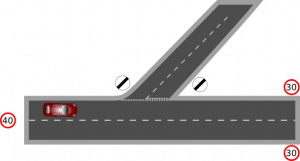 The above example is taken from the A259 (actually it is flipped along the horizontal axis for the sake of clarity) moving towards Peacehaven in a 40 zone, passing a side road that is national speed limit before moving into a 30 zone.

Another lesson next Monday.