I found this function totally accidentally when I knocked my mouse into a key when something interesting popped up on Twitter. I happened to have a variable selected like so:

The key that I knocked was the Number Pad “+” key, and it expanded the selection like this:

As any self respecting Systems Administrator would do I wondered if doing exactly the same thing repeatedly would have equal or compound effects. 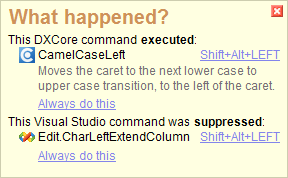 As I was looking for documentation on this function; I found that you could use the CamelCase select function to start selections off using Ctrl+Shift+Left (or Ctrl+Shift+Right) this will take your selection from the current cursor position to the next upper case character to the left (or right). This can be coupled with the Number Pad “+” to expand your selection from a variable to an expression, to a line then a block. Neat! Each of these discoveries was announced with a handy little popup in the bottom right hand corner of the viewport telling me what happened, and if relevant what function was suppressed. I am going to make a concerted effort to spend my lunch break watching some more videos on DevExpress' training site. I got 10 minutes today and watched what appeared to be footage from a launch event or a conference which was interesting but didn’t really teach me anything specifically.