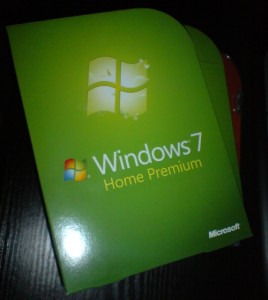 Windows 7 turned up in the post today. The red box is Visual Studio 2008 which is there to show that the boxes have a similar profile to the old style hard cases. I have been running the Beta since it was first available to the general public, and I have had Windows 7 Business at work for a couple of weeks now. Bought Windows 7 Home Premium for about £45 from Tesco. One copy for the main PC which I will probably re-build at Christmas and one copy for the laptop which is re-built now.

Scott Hanselman described Vista as an operating system that stabs you in the eye a thousand different ways, I would have to agree with that. Windows 7 is different, things work how you think they should and don’t seem to randomly break when you least expect it.

As for the title of this blog post, I have mostly been installing Windows 7 to Vampire Weekend which Kev introduced me to. The track M79 seems to have taken some inspiration from the Sailor’s Hornpipe better known as the Blue Peter theme tune, seems to cut off just at the moment I am expecting it to carry on into the main part of the music.

Maybe there is a Mike Oldfield link in addition to the lyrical Peter Gabriel link. If I am moved to over the course of the next couple of week I shall try and point out some of the new features available in Windows 7 that are cool. For the time being try the following hold down Alt, while still holding down Alt press Alt Gr (The other side of the space bar) then press Tab. For some reason you get the old XP style Alt-Tab window. Utterly pointless?